Have you ever awake at night, worrying about cash flow and paying the bills. The next morning, You mull over the problem about your texture business while sitting in traffic on the way to the office. If you face these problems, why not try on a new machine called DTF printers? DTF printers are also known as direct to film printer or direct to film heat transfer printer. As its term suggests, the working process of DTF Printer is that the printing machine directly print on the PET film. Through heat transfer machine, the patterns will be transferred from the film to the fabric, which is quite convenient and cost efficient. Due to the plastic ban of some countries, it seems that the PET film must be taken place by something that can comply with the standards. To response to the call of environmentalists, we have changed the PET film to DTF transfer paper. It has many merits: to begin with, the DTF transfer paper can be reused. After transferring the pattern, the PET films must be useless. And the PET film which is made of plastic is definitely causing environmental pollution. To solve this problem, we have developed a new technology to use paper replace of plastic film. Transfer paper is not the preserve of sublimation printer, and it can also be applied to DTF printer. When it comes to paper, it seems that it can be used in some writing ways. Actually, it true. Different from plastic films, the DTF transfer paper can put into some stationery using. Made up of ink absorbing layer, release layer, closed layer, paper base and back coating. DTF transfer paper is What’s more, the DTF transfer paper can prevent some problems like man-made statics, greasy stains and damp. Here are the advantages of DTF printers. 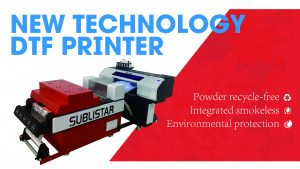 All the Texture are available

There are various fabric machines which in the market. But it seems that you can’t buy all of them home. They’re in a competitive relationship, surrounded by other texture machines. Is it just luck, or is there some secret to success? It’s not god blessing. If you choose DTF printer, you will be close to success. Can you believe that it’s no fabric limitation of DTF printer. Sublimation printers can only be applied to polyester and light fabric, while DTG printer is suitable for cotton. As the holy grail in texture industry, direct to film printer is suitable for all the materials and all colors no matter light or dark. Oh, that’s the reason why DTF printer is versatile in printing world.

Economical than other Texture machines

Although the function of DTF printers are similar to traditional texture printers, their price of machine is much cheaper than the previous ones. Different with DTG Printer, DTF doesn’t need pretreatmrnt. If you don’t pretreat the clothes when using DTG Printer, you will get a clothes that doesn’t as colorful as it should be. That’s so upsetting. Then DTF printing can help you save 50 percentage of white ink. But DTG also has some irreplaceable merits.You don’t need to set up for DTG. Screen printing requires the creation of a separate screen for each color. This step alone will take more than an hour. We haven’t even reached the printing part! With DTG, we can skip that annoying step and go straight to interesting things.

A Comparison with DTG Printer 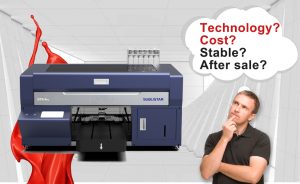 No pretreatment              Not available on many colors or materials 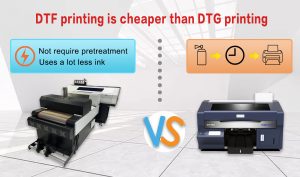 No matter how many colors are involved, DTG will print the whole design on your shirt at one time. As for screen printing, each color requires a separate weld bead and screen. Since each screen needs to be created and set up separately, it actually increases time and costs.

Although screen printing is the best choice for some T-shirts with several colors, it would be very expensive in some designs with complex designs and different colors. The biggest advantage of DTG Printing is to print the pattern directly after  clicking the “start” button on your computer. In spite of long printing time, DTG Printer essentially prints a high frequency color image with details rather than just print some simple patterns. If so, it will save you much time.

Successful businessmen believe they create their own destiny, and they allow others to do the same business. Just because they are confident that what have achieved can’t be imitated by others. The key element to their success is themselves rather than their business model. After reading my article, I hope you can understand what you have done is all based on your own decisions rather than others’ suggestions.

Pros and Cons of the Led UV Printer